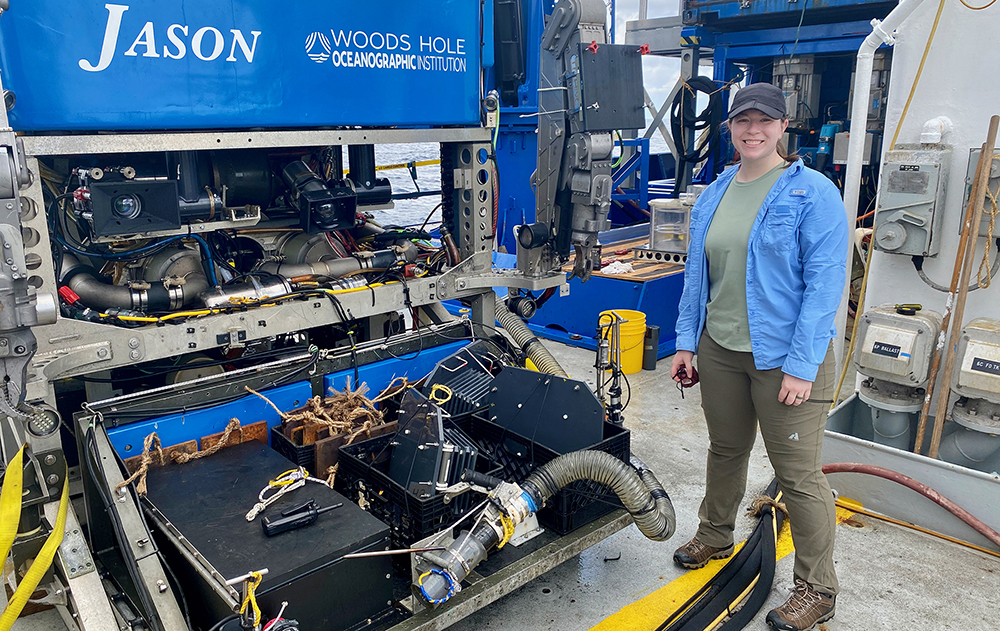 Funded by an NSF grant, biologist and PhD student Nicole Pittoors travels to great depths to measure the health of the ocean.

When people hear the term research cruise, they tend to focus on the word cruise. Ph.D. student Nicole Pittoors focuses on the research. She loves these excursions because the research goes on almost all of the time. Her current project takes her to hydrothermal vents in the Eastern Pacific and to deep-sea coral reefs in the Gulf of Mexico as she uses genomics to study the dispersal, recruitment and connectivity of benthic invertebrates in an effort to establish baseline data on biodiversity.

The biodiversity of benthic invertebrates—organisms without spines that live on the bottom of the sea floor, such as clams, oysters and corals—is a good indicator of ecosystem health, she explains. Researchers study benthic ecosystems to understand which areas of the ocean are important to protect from human activities, such as oil extraction and deep-sea mining.

Pittoors has been working in the Flower Garden Banks National Marine Sanctuary, located 100 miles offshore of Galveston, Texas. It is a collaborative project with the National Oceanic and Atmospheric Administration and the Smithsonian Institution, using Autonomous Reef Monitoring Structures (ARMS) to understand coral recruitment and benthic biodiversity and which environmental factors drive biodiversity hotspots. In 2019, 40 ARMS were deployed, then recovered in August, after which organisms living on them were preserved for DNA sequencing.

ARMS are a pile of PVC plates designed to mimic the complex structure of a reef on which marine animals live. What makes them special is that they are a globally standardized method to measure biodiversity and the health of reefs across the world. ARMS allow scientists like Pittoors to document small organisms not normally seen by using a camera located on a remotely operated vehicle (ROV).

A prestigious National Science Foundation Graduate Research Fellowships Program (NSF-GRFP) grant allows Pittoors to go on a research cruise this spring to further study the use of ARMS at the East Pacific Rise west of Central America, with the goal of testing ARMS methods to compare approaches used to characterize recruitment and biodiversity of hydrothermal vents.

The hydrothermal vents are similar to the geysers of Yellowstone, Pittoors says, and occur thousands of meters beneath the ocean’s surface near spreading centers or subduction zones in the earth crust, where water is heated by the hot magma in the crust and pushed out of a “chimney.” The fluids that are emitted can reach up to 400 degrees Celsius and are rich in minerals. Hydrothermal vents can also go through volcanic eruption, making them an excellent system to explore how these biological communities can recover from large instabilities. 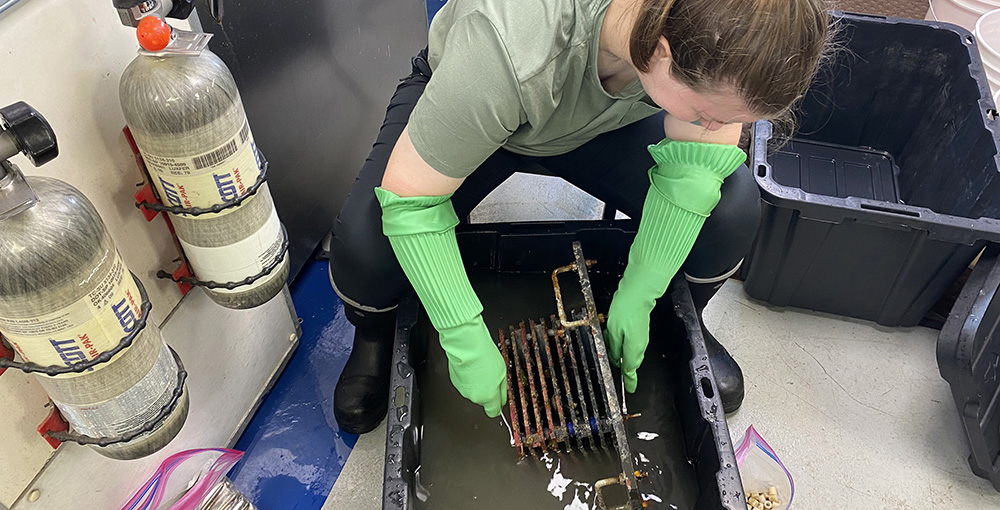 Finding Pittoors studying the ocean at all was not an expected career path. She grew up in Detroit, Mich., but was entranced with the ocean. She would re-watch the deep ocean and shallow seas episodes from the Planet Earth series. She didn’t think it was possible to be a marine biologist and intended to pursue pre-med at Northern Michigan University. But, she became interested in climate change and its impacts on marine life, and after her first week in college, she decided to study ecology.

After working as a guest student in a deep-sea lab at Woods Hole Oceanographic Institution in Massachusetts, she became interested in larval biology and the deep sea and sought out scientists who were recruiting Ph.D. students. She was thrilled to find that in the lab of Santiago Herrera, assistant professor of biological sciences, she would study bioinformatics and genomics. She considers Herrera to be a pioneer in using genomics to study deep-sea life. The field of ecology is increasingly using molecular methods, which is commonly used in shallow water but not for deep sea corals, she notes.

The NSF-GRFP grant provides her with the resources to focus solely on research and offers the flexibility to participate in research cruises.

“A research cruise can be very intense, but you are fully immersed in your research. There is a lot of camaraderie, and we get to learn about each other’s research, discuss ideas and establish collaborations. Photos from a research cruise may look cut and dried, but there’s a lot of energy behind each sample collection, and discoveries are often made in real time,” she says.

“It feels like we are taking part in a space mission!” she says. “As it descends to deeper depths, we encounter many fascinating gelatinous and alien-like animals.”

With her experiences in mind, she hopes to connect with area teachers and create an educational program on coral reefs and deep-sea evironments, with the hope of exposing them to possible careers in marine science. Looking ahead, Pittoors is concerned that young students who do not live where there is access to the coast will not get to “experience the magic of oceans and know how we are all connected to it, no matter how far we are from the beach.”